My brother, Michael, passed away recently. He lived thirteen years with a donated kidney, which enabled him to see a daughter marry, a son turn his life around, his grandson become a marvelous young teen, another daughter graduate nursing school and run the ER at SF General. To see his wife grow more beautiful each passing day. To celebrate his 66th birthday. And much, much more.  He was a Good Man.  His passing was, for me, noble  –rich with integrity and courage.  He had the gift of lucidity and heart to express sincere gratitude and bid  farewell to friends, siblings, caregivers, his own beautiful family.

A few days after his passing, I was at loose ends, so my HorsePlay HP2 partner, Lynne, who also mourned Michael’s passing, suggested a trip “to the horses.”  We headed to Cavallo Farm in Ypsilanti MI, one of our locations for HorsePlay HP2 work.  A herd of thirteen grown since March to twenty-six, plus two yearlings!

Both Lynne and I in a place, that day, of “nothingness.”  Neither happy nor sad.  Not  eager or reticent.  Ambivalent.  Subdued.  Empty.  Barely enough energy for motion to get us to the farm and out to where the herds grazed.

In silence we headed to the North Pasture and planted chairs, to simply sit.  The scattered herd, fifteen or so, slowly closed ranks to encircle us, some acting as official greeters to nuzzle and sniff.

After several minutes, our friends began to disperse toward the far end of the land.  Lynne rose and headed to the West Pasture, where three mares and the filly, Diamond, played; and I remained, drifting closer to the middle of the large pasture.  I stood for a few moments, taking in the panorama of woods and herd in the distance, the smaller herd in the East Pasture where Doc, the colt, was learning the ropes from Gus and the other boys, with Miz Zippi to teach him manners.

I gazed at the ground supporting me, mesmerized, soothed in absence of doing.  In the periphery, Jamie had come, from across the pasture, a calm and friendly chestnut, grazing.  Other than him, I was quite alone.

Long moments passed, until, directly behind me, twenty or thirty feet away, an imperceptible presence.  Approaching.  Faint hoof beats in the bending grass swished a rhythm on parched land, parting the still and cloudless air.

Now stopped.  Standing tall, legs braced against my rounded back, hoofs touching me where the land met both of us.  Waves of tender power emanating.  Then breaths all round my head.  Behind at my shoulders, side to side, above.  Whiskers feathery on my cheek and in my hair.  Soft and long inhales and exhales.  I sat.  Curled in balm, not knowing the Four-Leg who came to be with me.  I did not see.  I only heard and felt.  Then a lowered neck enfolded me,  a massive head rested gently on mine.  The orb of my skull, the curve of my shoulders wrapped in a Four-Legs’ embrace.  Seconds became timeless.  Then a soft sigh, and my friend stepped aside and ambled on.

Lifting my head as he walked away, I saw it was Ryan, a big, black thoroughbred youngster, with a white blaze that would one day evoke elegance.  Only then did I notice Sunny, who moved quietly into view, then stepped near, within arm’s reach.  A bay quarter who’s become special for me.  Reserved, he teaches me patience, stillness.

I rose slowly as Ryan walked away.  Sunny moved in close, beside me, inviting me to graze with him, the two of us apart from the rest of the herd.  We meandered the pasture, barely moving.  Small steps, soft crunches, I leaning, almost collapsing, into his immense and gentle strength.  With each hoof fall I rested against him, dissolving into his magnificence.  Breathed his subtle scent, mesmerized by the rich, dark chocolate of his shining coat, sunlight glinting off the black of his mane.

Holding on to all that exists in a moment. 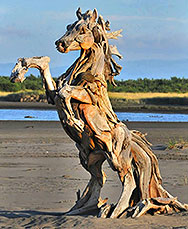